Gasherbrum III , surveyed as K3a, is a summit in the Gasherbrum massif of the Baltoro Muztagh, a subrange of the Karakoram on the border between Xinjiang, China and Gilgit-Baltistan, Pakistan. It is situated between Gasherbrum II and IV. Gasherbrum III fails to meet a 500-metre topographic prominence cutoff to be an independent mountain; hence it can be considered a subpeak of Gasherbrum II. Gasherbrum III was one of the highest unclimbed summits in the world up to its first ascent in 1975, by Wanda Rutkiewicz, Alison Chadwick-Onyszkiewicz, Janusz Onyszkiewicz and Krzysztof Zdzitowiecki, members of a Polish expedition.(Wikipedia) 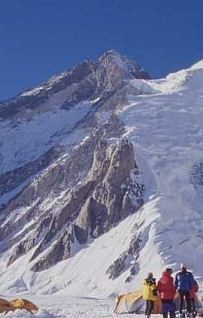